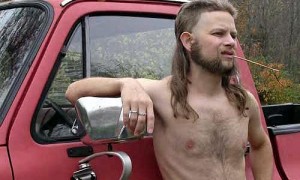 Ozark, Alabama – Jeff Stills was a successful crop farmer from the lower state of Alabama that was raised on a farm he would soon call his own. Unfortunately on the night of April 6th 1984 he flipped his General Lee replica(per his initial description).  After further questioning he revealed it was in fact a ‘78 Gremlin given to him by his aunt with a crudely painted “homage” to the General Lee at best.  He then entered a coma deeper than any Dukes of Hazard plot.

Doctors had all but given up hope until a month ago he started to show signs of recovery. Within a few weeks he was fully conscious and speaking with the remaining members of his family.

“He has adapted to present life very well. Although it seems some things are taking more time.” His uncle explains.

“A black guy? I mean, Jesus Christ how long was I out?” Jeff could be heard exclaiming from his hospital bed.

“I know Michael Jackson was getting real popular and they had just gotten their own holiday and all but damn.” When asked Jeff refused to clarify who he referred to as ‘they’. He nervously eyed an African American nurse in the distance. He then whispered with his distinct southern twang “I thought that was the whole point I voted for Reagan.”

Only time will tell how smooth his transition back into lower Alabama society will be.

“I think he’ll fit right in,” his uncle optimistically proclaims.