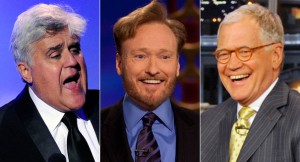 Jay Leno:“Well, President Obama is back on the campaign trail. President Obama’s telling people that wasn’t the real Mitt Romney who showed up at the debate. Let me tell you something, whoever it was, Obama had better hope he doesn’t show up again or he’s going to get his ass kicked.”

Jay Leno: “Mitt Romney really on the offensive the other night. Time after time he made statements that I think damaged President Obama’s credibility. It’s almost like he was Joe Biden.”

Jimmy Fallon: “In a new interview, First Lady Michelle Obama said that she would choose Will Smith or Denzel Washington to play her husband in a movie. Or as Democrats put that, ‘Any way they can play him in a debate?'”

Jay Leno: “Well, the Obamas celebrated their 20th wedding anniversary Saturday night in Washington. Yeah, they celebrated at a restaurant called Bourbon Steak. That was the name of the restaurant they went to. Bourbon Steak. I understand Michelle had the steak to celebrate the occasion. And the President had bourbon to help forget the debate.”

Jay Leno: “Now, it’s getting catty. Democrats are accusing Mitt Romney of cheating during the debate. They said he cheated. You know, I don’t know who he cheated off of. I think you can rule out President Obama, okay? He didn’t have any answers worth stealing, did he?”

David Letterman: “It’s Nobel Prize season. Are you aware they’re passing out the Nobel Prize? Earlier today, a medical team received a Nobel Prize for reviving the Mitt Romney campaign. They brought it back to life. They gave them the Nobel Prize.”

Jimmy Fallon: “Mitt Romney was out on the campaign trail yesterday and while visiting a grade school, Romney told students that fourth grade was his favorite. And then he said, ‘Unless you’re in another grade, then that was my favorite.'”

Jay Leno: “Can you believe it’s only another month until we start arguing on whether the election was stolen or not? It’s hard to believe.”

Jay Leno: “Well, tomorrow night, Joe Biden and Paul Ryan will be facing off in the Vice Presidential Debate. Well, actually the White House is a little worried, you know. In fact, Biden’s handlers are telling him ‘Whatever you do, don’t be yourself.'”

David Letterman: “But Democrats took kind of a pounding at the last debate, so now they’re going to be a little more aggressive. Joe Biden is thinking of opening with a head butt.”

Jay Leno: “According to the newest polls, President Obama has lost his lead and is now tied with Mitt Romney. And political experts say they haven’t seen a slump in October this bad since Alex Rodriguez, I guess.”

Jimmy Fallon: “This is nice. The Obama’s dog Bo turned four years old. Yeah. He spent the day as he always does digging holes, chasing squirrels and coaching Obama for the debate.”

Jay Leno: “Well, although we’re taping before it’s over, there was a lot of anticipation for tonight’s Vice Presidential Debate. Joe Biden took six days off to prepare for it. President Obama took just two days off — well three, if you count his actual debate.”

Jimmy Fallon: “And this is big. Today, ‘Time’ magazine published a bunch of pictures of Paul Ryan working out. Have you guys seen these? … Come to the debate, stay for the gun show.”

Mitt Romney once invested in the Yankees. Which finally explains the time the Yankees tried to trade Alex Rodriguez to China.