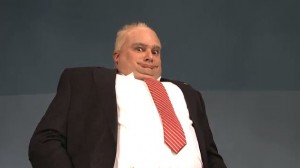 The political humor gift that keeps on giving, Toronto Mayor Rob Ford, was featured in the November 16th SNL opening. Rob Ford was caught on camera smoking crack, admitted to buying illegal drugs in a council meeting, denied soliciting oral sex to a female coworker, and probably a bunch of other funny shit that I am forgetting at the moment. The best part is that Mayor Rob Ford refuses to step down after all the controversy. Check out this SNL opening which also takes a jab at the 60 Minutes / Benghazi Controversy.