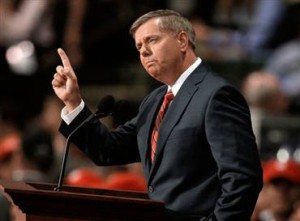 Is Benghazi a scandal, yet? Senator Lindsey Graham (R-SC) isn’t letting the rough Obamacare website launch or anything else that resembles an actual issue get in the way of making Benghazi the focal point of his upcoming efforts to delay or even thwart key nominations presented to the Senate by the Obama administration.

To be fair, this is probably a much more popular position with their conservative voters than their more recent government shutdown antics.

WASHINGTON (Reuters) – Republican Senator Lindsey Graham on Sunday said he will try to block White House nominations for key jobs until he gets more information on last year’s attack on the U.S. mission in Benghazi, even after a TV network pulled back from a story on the attack that Graham had cited.

Graham has threatened to block President Barack Obama’s nominations of Janet Yellen to head the Federal Reserve and Jeh Johnson to head the Department of Homeland Security until the administration provides more information on how the attack occurred.

CBS news magazine “60 Minutes” on Friday said it would correct an October report on the September 11, 2012, assault on the U.S. diplomatic mission in Benghazi, Libya, saying that a source who told the program that he had been present at the scene gave conflicting testimony to the FBI.

Graham had cited the report – which quoted a security official who described being at the compound during the attack, fighting off an assailant and seeing the ambassador’s body – as evidence that the mission did not have adequate security despite indications militants were planning the assault.

Asked on CNN’s “State of the Union” program if he would lift procedural blocks on White House nominees after the “60 Minutes” correction, Graham said, “No. My request has been going on for a year, to talk to the five survivors of the State Department.”

Republicans in Congress have said the assault on the mission and the death of Ambassador Christopher Stevens show the Obama administration has failed to maintain security at foreign posts.

Graham is demanding that Congress get to question five State Department employees who survived the attack.

Several other Republicans also have threatened to put holds on Yellen’s nomination which would require 60 votes from the 100-member chamber to overcome.