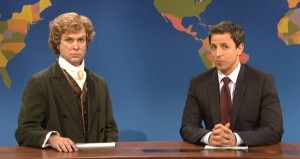 Jay Leno: “According to ‘The Washington Post,’ the White House is considering appointing a civilian to lead the NSA. And here’s the great part. If you’re interested in the job, no need to submit a resume. They got all your information already. They’ll call you.”

Conan O’Brien: “In a new interview today, Sarah Palin refused to endorse Chris Christie. … Afterwards, Christie told Palin, ‘Thanks, I owe you one.’”

Conan O’Brien: “Many scam artists are trying to take advantage of the problems with the Obamacare website. Experts say you can tell it’s a scam site if it quickly and efficiently signs you up for healthcare.”

Jimmy Fallon: “It seems like everyone is still pretty upset about the Obamacare website. It’s got all these glitches and nobody is signing up. They’re so desperate to turn this thing around that Department of Health and Human Services emailed 275,000 Americans encouraging them to give the Obamacare website another try. Then they said, ‘But one at a time.’”

Jay Leno: “Yesterday at the White House, President Obama met with various leaders of the American Indian tribe. He promised them, ‘If you like your medicine man, you can keep your medicine man. That’s right.’”

Jimmy Fallon: “Today, President Obama had a press conference where he said that he fumbled the roll-out of Obamacare. But the good news is, he just got signed to play running back for the Oakland Raiders.”

Jay Leno: “Well, at a press conference earlier today, President Obama talked about HealthCare.gov, and he said buying health insurance is never going to be as easy as buying a song on iTunes. Well, the answer is simple. Fire the website people and hire the people from iTunes.”