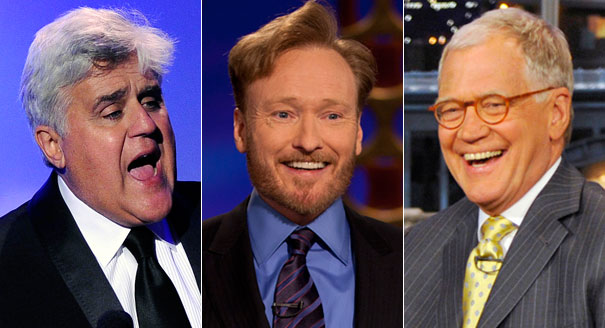 Jay Leno: “President Obama, as you know, apologizing for this whole healthcare debacle. He said today, ‘We fumbled.’ That’s what he said: ‘We fumbled.’ You know, a fumble is a turnover. That can happen to anyone. This is more like, ‘We told everybody we were good at football. We actually really suck at football.’ I mean, that’s closer.”

Jay Leno: “President Obama and his top aides met with insurance company CEOs at the White House on Friday. So, we’ve got politicians meeting with insurance salesmen. You know, you throw in a couple used car dealers, you have the trifecta of professional lying right there.”

Jay Leno: “Former President George Bush on the show tonight. Very excited about that. As you know, he’s nicknamed ‘43’ because he was the 43rd President. And President Obama is nicknamed ‘44’ because that’s how many people have signed up for Obamacare.”

Conan O’Brien: “President Obama is being criticized for not attending today’s ceremony commemorating the Gettysburg Address. … In fairness, though, Lincoln did not attend Obama’s ‘Sorry About This Crappy Website’ speech.”

Jay Leno: “According to another poll, 52 percent of Americans now believe President Obama is not honest. Which is why today he changed his slogan from, ‘Change you can believe in,’ to, ‘You can’t handle the truth!’”

Conan O’Brien: “Members of the Tea Party gathered outside the White House to demand President Obama’s impeachment. The President said he appreciated their views, and he is setting up a new website where they can voice their opinion.”

Jay Leno: “Vice President Joe Biden went to pick up a couple sandwiches for lunch for him and the President and, when he got there, he didn’t have enough money. He had to borrow ten bucks. He was ten bucks short. See, too bad it wasn’t a Chinese restaurant. He could have just added it to the 17 trillion dollar tab we have running there.”

David Letterman: “And a couple of days ago, Florida Congressman Trey Radel was arrested for drug possession. Then, he says, ‘Look, I need the cocaine, I’m not going to lie, I need the cocaine to stay awake trying to sign up for Obamacare.’”

Stephen Colbert: “Folks, we have just witnessed the death of an American institution. The power of the minority to filibuster anything they didn’t like is one of our founding principles. That’s why it’s not in the Constitution.”

Stephen Colbert: “And we can’t trust the Democrats with all this power, folks. They can’t do anything right. At Harry Reid’s press conference announcing the end of the filibuster, they misspelled filibuster with two ‘l’s.’”