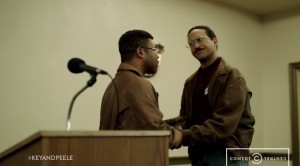 Let’s be honest, it is hard not to smile a little bit at the thought of an African-American Republican. A century ago, this would have been a no-brainer. But a black voter supporting the Republican party in the 21st Century deserves a second glance, at the least.

Just imagine a room full of Herman Cains. Good luck getting that image out of your head.

If you have not seen Comedy Central’s Key & Peele, you are really missing out on same great dry satire. They are well known for their Obama’s Anger Translator sketch.