While the candidates and circumstances surrounding presidential elections often change, the voter heuristics often do not. The 2012 election brings new twists, such as: an African-American incumbent, a high unemployment rate that would be even higher if it were not for the shrinking labor pool, and a Republican challenger that is a picture perfect candidate in a time where voters are seemingly fed up with picture perfect candidates. However, by analyzing voter behavior through the use of various campaign dynamics, I will show that President Barack Obama will easily win re-election in the November contest.

In 2008, minorities and the youth vote played a major role in Democrat Barack Obama’s victory over his Republican opponent John McCain. While these two groups will surely be important for the Obama camp, this election cycle is bringing attention to another, much larger, group: female voters. 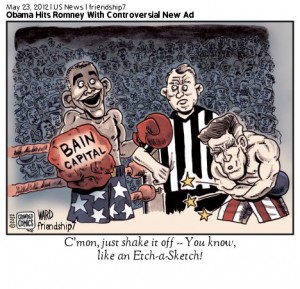 In the past, the Republican party has been far more successful at framing issues for America’s unabashedly uninformed electorate. Michael Delli Carpini, in his book What Americans Know About Politics and Why It Matters shows that the typical voter in America probably carries a napkin to wipe the drool that comes out the side of their mouths (Unless, of course, they’re stuffing their face with food at the time). The following passage shows that there is little rhyme or reason to what Americans do know about politics:

Simple characterizations cannot do justice to the range of political knowledge and ignorance demonstrated by the public. Some facts about political institutions and processes are known by a substantial portion of Americans: more than one in seven of these survey items was correctly answered by at least three-quarters of those asked. […] There is no obvious pattern to the particular facts citizens are more or less likely to know. (Delli Carpini and Keeter 71-72)

This shows that American voters are primed for any clever framing of political issues to help them make their decision.

Nixon had the anti-war counterculture hippies, Reagan had the Communists, George W. Bush, going into his re-election, had Middle Eastern terrorists. These are enemies that the average American voter can understand and feel threatened by. In 2012, Mitt Romney has little to scare the electorate with. Barack Obama, assailed by the fringe right as a Kenyan Muslim Cracker Killing Usurper Socialist, has led a federal government with the slowest inflation adjusted spending growth since Richard Nixon (Norris).

Taking a page from the right’s playbook, Democrats are decrying a so-called Republican War on Women. One may scoff at such a notion, but with the attack on Planned Parenthood funding, Republicans opposing contraceptive access through religious organization’s health plans, and various states enforcing stricter limits on abortions via Republican sponsored bills, it is certainly fair play for Democrats to demonize these actions in hopes of securing more female voters in November.

A recent USA TODAY/Gallup Poll shows President Obama leading Mitt Romney in female support by double digits in swing states (Page). While unprecedented, I foresee the Democrats winning the framing battle in 2012; putting Romney on the defensive more often than not.

Speaking of Mitt Romney on the defensive, Saturday Night Live has been beating him like a red headed step-child before he had even secured the Republican nomination. Whether it is because of the writers’ left-leaning stance or that fact that he lends himself to ridicule, or both, is debatable. Either way, he will have difficulty shaping his image in a favorable light for voters who first learned who he was on a Saturday Night Live clip (see: voter ignorance, noted above).

For a candidate that has been campaigning for this election since 2007, Mitt Romney has been a gaffe machine—spitting one out after the other; another one comes out before even a short attention span media could fully digest the last one. Despite years of practice to get his act together, Romney is now in the home stretch tripping on his shoelaces every time there is a microphone and/or camera to catch it. 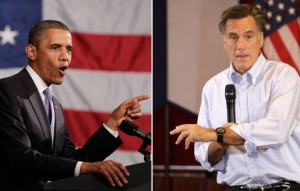 Which brings us to voter heuristics, which I see as a virtual tie between Obama and Romney. I do not feel either one particularly stands out more than the other in likeability, etc. Romney comes off as a rich douche-bag, but President Obama isn’t exactly winning any popularity contests himself. His “cool factor” helped bring out the youth vote in 2008, but this is a generation that has a short attention span so I wouldn’t bank on this helping him much in 2012. Not to mention, it is cool and hip to criticize a sitting president and get behind an underdog like Ron Paul.

As far as Romney’s religion, I do not see this being an issue for voters at all. As Nietzsche noted: “God is dead.” He died in Europe long ago and was on life support in the Bible Belt, but with each new generation, He’s flat-lining more and more. It is not at all unusual for a voter to shrug off a candidate’s religious views, one way or the other. In the next few decades, we will likely have a self-proclaimed atheist/agnostic in the White House.

Next up is fund raising. As John McCain learned the hard way, the Obama Machine is a magnet for cash. According to Politico, President Obama has a ten to one cash on hand advantage over Mitt Romney, as of April 20th (Haberman).

Mitt Romney faced a surprisingly tough primary challenge, which took a toll on his own fund raising coffers. But excuses are for losers and Mitt Romney will need invest in some knee-pads and drain all his donors dry if he wants to win the ad wars that go down in the late Summer and into the Fall. 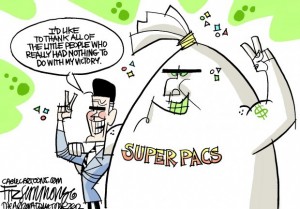 Another important new element in this election, however, are the infamous Super PACs. Made possible by our friends on the Supreme Court: Justice Kennedy, Chief Justice Roberts, Justice Scalia, Justice Thomas, and Justice Alito. In their defense (no pun intended), they were merely interpreting the law as it is currently written and it is now up to Congress to rectify the situation. Given the speed that Congress moves, and who is in charge of the House, this change is not likely to occur before this election. Like it, or not, Super PACs will play a major role in this election and many on the right are hoping it will help close the fund raising gap that Mitt Romney currently faces.

The Supreme Court’s decision on “Obamacare” could play in Mitt Romney’s favor if he continues to push for repeal, even though the law was based on his plan as governor of Massachusetts. Romney can use this SCOTUS decision as a way to win over the Tea Party wing of the Republican voter base. In the November election, I think that, perhaps ironically, the Court decision in favor of the individual mandate will play more to Romney’s benefit than Obama’s, when it comes to voter turnout. Support on the Democratic side for the healthcare reform seems tepid, on average. Opposition to the bill on the Republican side is almost rabid.

All things considered, smart money is on President Obama to win re-election in the Fall. The overall enthusiasm for Mitt Romney, or lack thereof, will likely have too much of a negative impact on overall Republican turnout for him to secure the swing states that he needs.