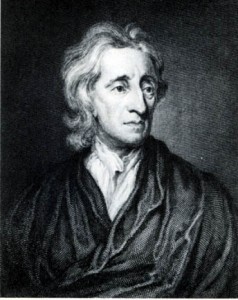 The impact John Locke’s writings and ideas had on the American Revolution, and its subsequent founding of the United States of America, is readily apparent to most who study this writer and this particular country’s history. Looking back centuries later, how has this influence played out? Did Hamilton, Madison, Jefferson, and various other so-called Founding Fathers look to the right person for inspiration? I would argue that they did.

Fundamental in Locke’s Second Treatise is the idea of social contract theory. What characteristics of the state exemplify its legitimacy? What is the role of the state? What is the citizen’s role in the state? These are questions that Locke sought to answer in his theory.

Much like Hobbes, Locke starts with man’s original place in nature. While he does not specifically call out Hobbes in this work, he does seem to be responding to Hobbes, passively. Locke counters Hobbes’ pessimistic view of nature with one that is no where near as dark or dangerous. Locke is more concerned with the preservation of natural born rights and the protection of accumulated wealth in the form of property. In contrast, Hobbes was more focused on the dangers of nature and the need to form a sovereign state to aid in the interest of man’s self-preservation. Locke stressed that the role of the state is to protect each individual from the will and desires of others. By forming a sovereign state that follows the will of the people, the individual’s need to fulfill their needs will be replaced with satisfying the common good and the greater community.

For Locke, what is ultimately missing from nature are three important things: a commonly understand and followed code of law, a neutral judge/arbitrator to fairly execute the law, and the ability to carryout punishments for those who do not follow it.

Locke insists upon a separation of powers that influenced the United State’s own system of checks and balances. I would argue that this system is one of the most vital aspects of our own system of government. While Locke may have had difficulty imagining a single state managing hundreds of millions of people across a country the size of the United States, many of his ideas seem to scale very well with states as they continue to grow ever larger.

The existence of our Congress, albeit not very popular or even technically functioning at the time of this writing(note: This was written during the height of the 2013 Government Shutdown, is heavily reliant upon Locke’s emphasis on the importance on a legislative body that passes laws based upon the consent of the majority. Interestingly, the idea of factions that Locke warned his readers about is arguably what is keeping this legislative body from fulfilling its role in the present day shutdown episode. However, I would argue that factions should play some role in our government due to the massive size and scope of the government itself and its electorate. James Madison, likely influenced by Locke, warned about the “tyranny of the majority”. While Locke’s system of a separation of powers inhibits this to an extent, I feel that some degree of factionalism in the form of parties or caucuses is beneficial to our system of government. Imagine if civil rights laws in the South during the 1960s were put up to a majority vote. Sometimes the majority is just plain wrong, especially when reflecting on history and various social issues that have sprung up.

While Locke’s influence on the founding of our country is just one writer among many, his particular influence seemed to have had the greatest impact and the strongest ripple effect. His ideas stand not only the test of time, but a real-world test in the form of the United States of America.