The United States of America proudly makes the claim of itself as the “land of the free”. Perhaps ironically, it has the highest incarceration rate in the world. In the U.S., out of every 100,000 people, federal and state prisons house around 500 inmates. This excludes local and county jail inmates.

The U.S. claimed the top spot worldwide in 2002.  2010 was the first year since 1972 that the U.S. prison population actually did not increase (Bureau of Justice Statistics).  Unfortunately, it only declined by 0.3% in 2010—which is hardly enough to put even the smallest dent into the dramatic incarceration rate increase in the U.S. since the 1970s.  Since the mid 1990s, violent crime rate has dropped quite a bit for both males and females.  From 1991 to 1998, the crime rate in the U.S. decreased by 22%.  However, the incarceration rate increased a whopping 47% during this same time period (The Sentencing Project 2005). So why does the incarceration rate not follow the same downward trend as overall crime rate? 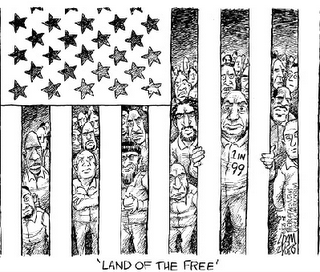 Proponents of tougher sentencing and longer incarceration times would point out that this is proof that tougher sentencing leads to a reduction in the crime rate. However, these are national average rates and a better analysis of the incarceration rate’s effect on the crime rate would involve state comparisons. One such study compared individual state’s rate of increase in incarceration rate to their rate of decrease in crime rate and showed no noticeable pattern in the latter leading to the reduction of the former (The Sentencing Project 2000).

Analyzing regional data gives further insight into the national average figure. In the Northeast, the rate per 100,000 is 296, in the Midwest it is 389, in the West it is 418, and in the South it is 552 which is the only region that was above the national average.  The rate in the South is almost double that of the Northeast.  The two highest states are Louisiana at 867 and Texas at 648.

As for the national incarceration rate figure, why the sudden upswing from the 1970s to now? Many would credit our nation’s troubled War on Drugs. In 1971, Nixon declared that drug abuse is “public enemy number one in the United States.” One thing that time has showed is that this increased prohibition of illegal drugs only serves to solidify and provide incentive for drug “black markets” to operate. Rather than focusing on treatment for drug users, which was the standard early on under Nixon, the War on Drugs over time turned more and more into the mass incarceration of our nation’s drug addicted.

Another disturbing trend of incarceration statistics and the aftermath of our nation’s War on Drugs is the rate of black males as prison inmates in relation to their white counterparts. Young black males aged 18 to 34 are six times more likely to be incarcerated than their white male counterparts. This is greatly in disproportion with the racial demographic of the country (Population Reference Bureau).

Another victim of our country’s aggressive penal system is the mental ill. As public funding for psychiatric care facilities, both in-patient and out-patient, have dwindled into almost nothing in most states, our nation’s prisons have become the de facto replacement for state ran mental asylums. An estimate by the Bureau of Justice Statistics shows that 16 percent of state and federal adult prisoners were mentally ill. Of the mentally ill in this country, there are three times as many in the prison system as there are in hospitals being treated (National Alliance for the Mentally Ill).

One thing that stands out when observing our prison system and who is in it is the fact that not everyone in it deserves to be there and vice versa. With lack of government oversight and a culture of greed on Wall Street, various high risk securities were being packaged into AAA derivatives that contributed to a housing bubble, and ultimately, the collapse of the worldwide economy around the Fall of 2007. Many of these CEOs and traders whose greed contributed to the rapid decline of the average Joe’s 401k, and in many cases, his or her job, are still currently free and not even facing any charges.

Why do we continue to lock up our nation’s poor at alarming rates? Reiman and Leighton, in The Rich Get Richer and the Poor Get Prison, use statistical data to show the growing wealth gap in our country along with a correlation of those in poverty being sent to prison in large numbers. Poor black males receive shockingly disproportionate sentences compared to their wealthy counterparts. Black offenders, when convicted of a felony that makes them eligible for the death penalty, are also almost twice as likely to get the death penalty than white defendants in the same scenario.

What concerns me the most with the incarceration rate in this country is that, as a social problem, it is the embodiment of several other social problems. When considering incarceration rate, one must also consider poverty, racial discrimination, urbanization, and our nation’s failed “War on Drugs”; which, based on statistics, could be called a “War on Low Income Black Males”. Our prison system contributes to unemployment and homelessness by

United States law enforcement’s sordid history of oppression of minorities and the poor predates Nixon’s War on Drugs. Since Reconstruction, and at its peak during the height of the Civil Rights Movement in the 1950s and 1960s, law enforcement personnel, most particularly in the South, used violence to enforce Jim Crow laws that classified African-Americans as second class citizens. The current statistics showing alarmingly high rates of incarceration among black males is merely a continuation of this tradition in a different form. This time it is more institutionalized, and perhaps as a result, a more difficult problem to bring attention to and bring reform.

I am also alarmed at the use of prisons as a replacement for properly funded public mental health care facilities. President Carter created a Presidential Commission on Mental Health which ultimately led to the passage of the Mental Health Systems Act in 1979. While this ambitious legislation aimed to improve the state of mental health care in this country, it was dismantled by the Reagan administration amongst a nationwide furor against “big government” and mental health funding would make it to the chopping block for the first of many times in history.

As far as racism in the criminal justice system, progress is very slow.  Within a year or so of taking office, President Obama signed the Fair Sentencing Act of 2010. This law greatly changed the sentencing disparities between crack cocaine and powdered cocaine. Prior to this bill, heavier crack cocaine sentencing was enforced on the nation’s poor blacks with mandatory sentences for even smaller quantities of possession. This is one example positive example of some progress being made.

Our nation’s prison system exists to aid with social problems like violent crime. Instead, we are using it to house the mentally ill, drug addicts, and anyone who dares to show up as a courtroom defendant and be a minority. This is unacceptable and should be subject to scrutiny and change.