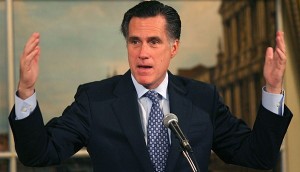 “Does anybody want this job??”

Washington, D.C. – After countless denials towards the press from various candidates seen as a possible Romney VP pick, the candidate is in dire need of a VP and the clock is ticking. In a rare, as of late, exhibit of bipartisanship in Washington, D.C., Congress and the President have rushed through a bill reinstating the military draft. Although this time, it is only to fill one position: Mitt Romney’s Vice President.

But so far, even this solution has seen its problems. Chris Christie was the first to receive a draft letter but has since filed for a waiver, for health reasons. His doctor notes, “Have you seen this guy? He’s huge and can go any day now. I wouldn’t nominate him to walk to the driveway and fetch the paper without worrying if I’d ever seen him again.”

Then, a draft letter was sent to Florida Senator Marco Rubio. While he hasn’t yet officially filed for a waiver, he issued the following statement: “Um….I’m gay. Yeah, like totally gay.” When we contacted a staff member and reminded them that the military no longer discriminates based on sexual orientation, they responded “Prank caller…prank caller!” No further comment was given.

The Romney campaign has even resorted to making Craigslist ads looking for a willing VP: 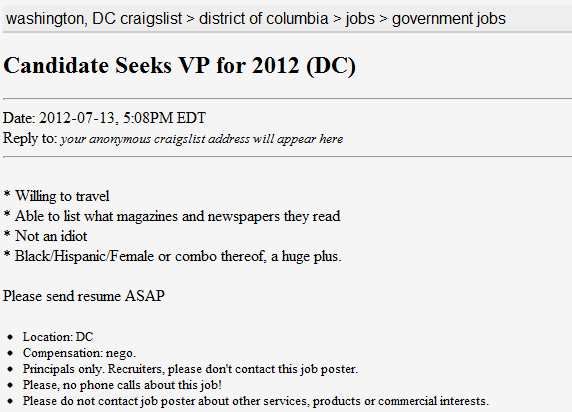 A draft letter has most recently been sent to former Bush-era Secretary of State Condoleezza Rice. But as of this writing, no one has answered the door to sign for the certified letter, despite weeks of attempts.

So who will Mitt Romney’s VP be? Whoever loses the coin toss, it seems.