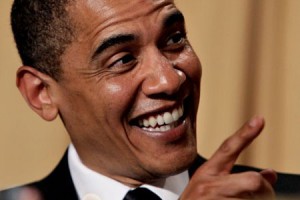 WASHINGTON, DC – After much anticipation, the Obama 2012 campaign has unveiled their slogan for this November’s election. We were able to speak with top communications official, David Axelrod, and former Chief of Staff, Rahm Emanuel, about what the slogan would be and the thought process that went behind choosing it.

“As I am sure many are aware, our 2008 campaign slogan, ‘Change You Can Believe In’, really fucking sucked,” Chicago Mayor Rahn Emanuel, who also served as President Obama’s Cheif of Staff in 2009 to 2010, honestly stated. “I mean, what kind of hippie shit was that anyway? Sounds like a slogan for tampons, or something.”

“Yeah, we all pretty much agreed this time around that we were going to take a different approach. Most notably, one that doesn’t suck. Just because we support gay rights doesn’t mean our slogan has to be,” David Axelrod, President Obama’s 2012 re-election campaign’s top communications official, chimed in.

Then Rahm put down his Scotch, and turned on a projector in the room to show the new logo and slogan. Initially, the screen was blank, but after a few f-bombs and a good kicking, the picture came up:

“How fucking cool is that shit, huh?” Rahm quipped, as he eagerly relocated the Scotch he had placed on the meeting room table a few minutes before.

After an embarrassingly long and gaffe-filled 2012 GOP nomination, a divided Republican House that can’t agree on what to order for lunch, a Speaker of the House that no one takes seriously, a revamp of the 1970s era Republican War on Women, and countless other sad displays of incompetence, what better way to sell Obama’s re-election than this?

After expressing my approval, Rahm interjected while I was mid-sentence, “Yeah, I don’t really give a shit what you think, reporter boy. Fact is, this new slogan is the fucking bomb. I’d love to hear what that cunt in Alaska thinks about it. Shit, she was 90% of the motivation for it.”

At this point, I was told to ‘get the fuck out and send in the next one’. He then insisted that my young female assistant could stay, if she so chooses.

As for how the slogan will pan out for Obama’s re-election, only time will tell.